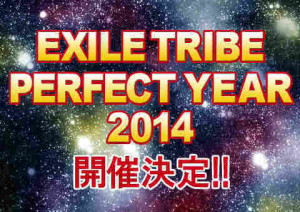 The trip to Japan was firstly, not part of my plan.. I have initially thought of visiting Japan later in the year. However, my younger sister insisted to go to Japan and thus, I decided to go with her to Japan this spring for 10 days.. After planning out our itinerary, it was coincident that EXILE will be performing in Osaka on the same week as my trip. After much consideration, my heart (and also my friends and family) told me to go for their concert before anything happens. True enough, HIRO san announced his retirement as a performer this year and I was indeed glad that I made the decision to attend their Osaka concert. 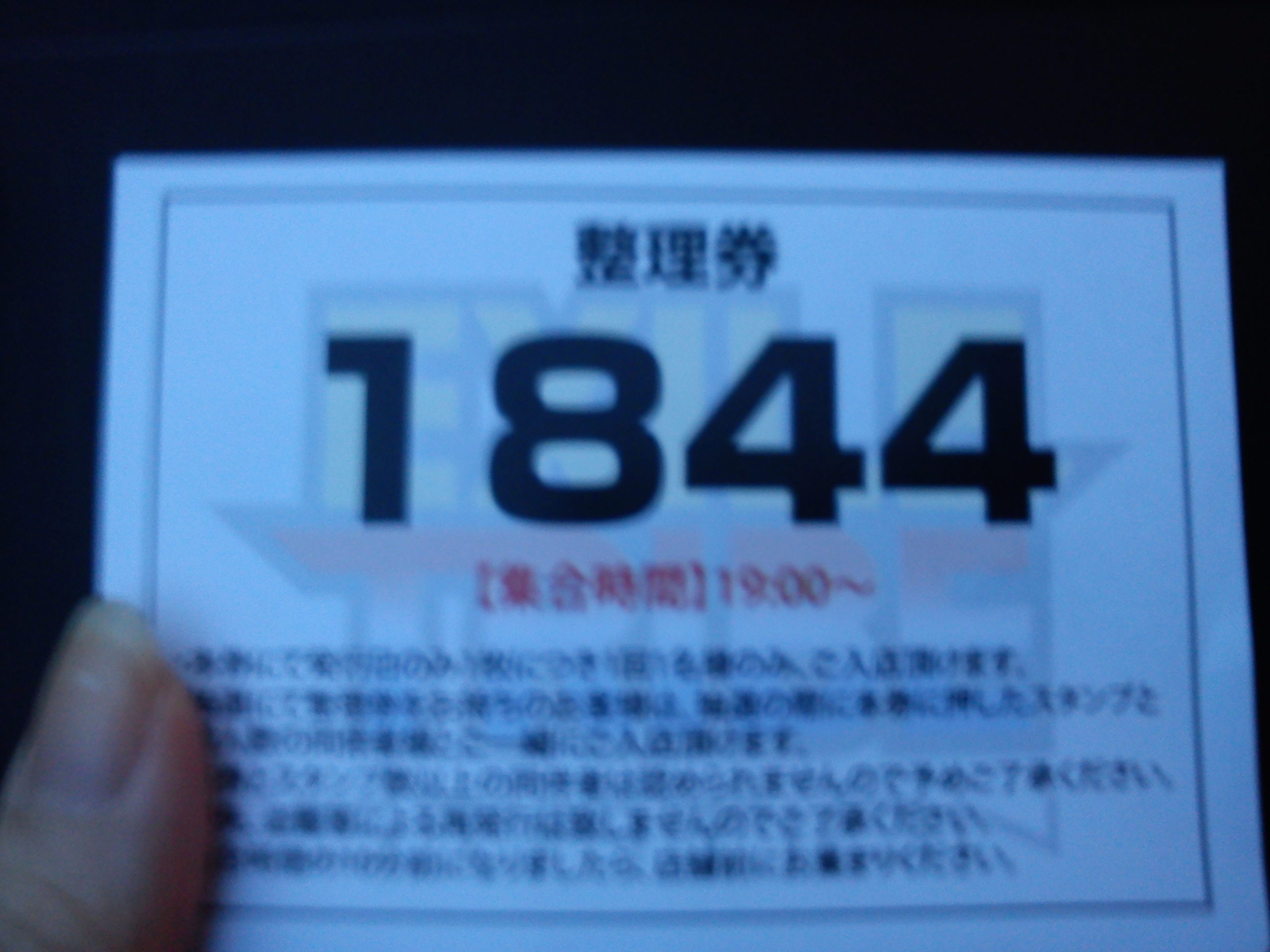 The reason for the long queue was probably because 16th April was the first day where the member goods were being sold. I killed my time at the nearby BOOK-OFF and went back to the shop at 18:45.. Sadly, there was still many people in front of me.. probably 100 or so and I only managed to enter the shop at about 19:30. 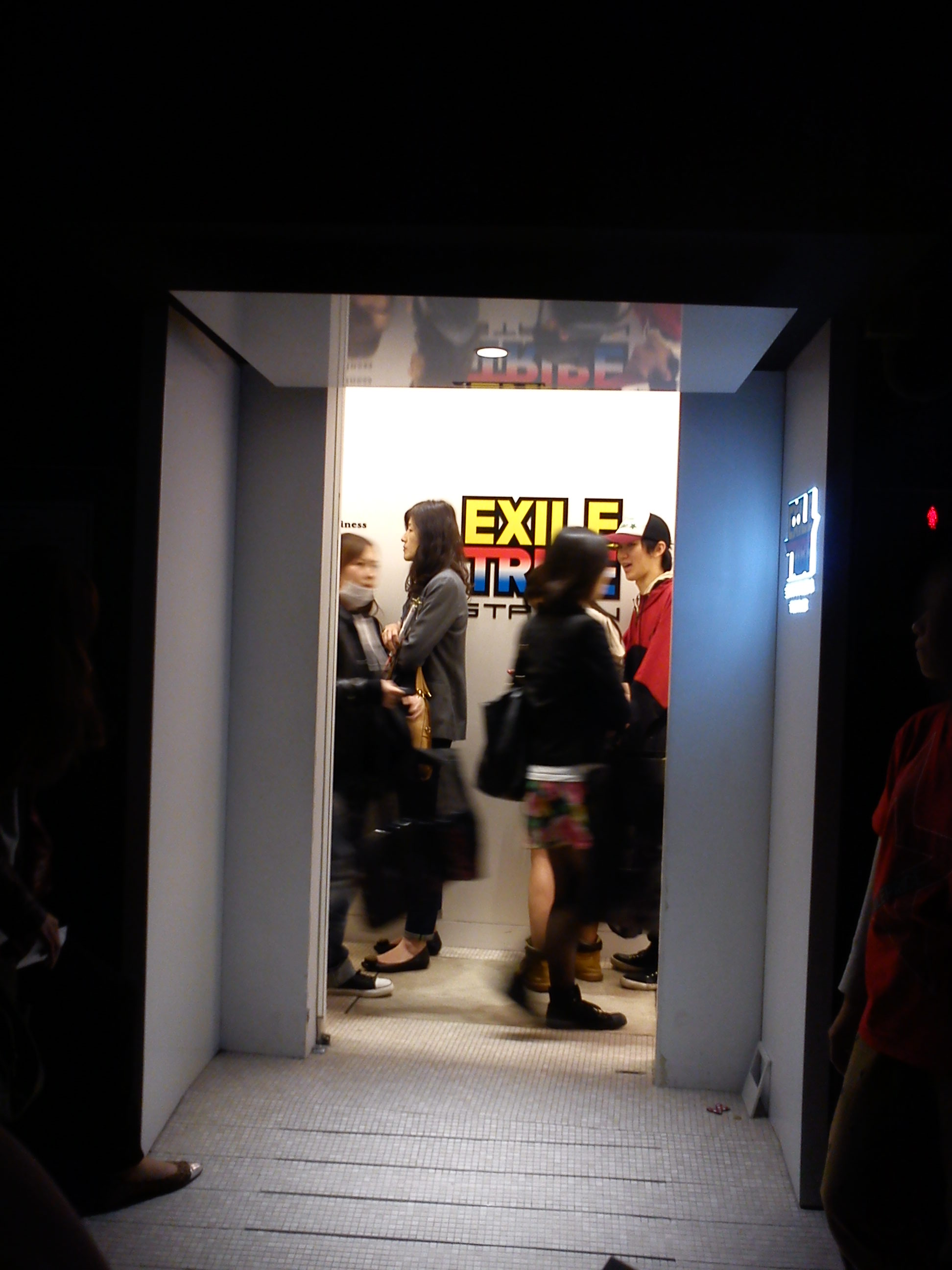 As I entered into the shop, I could not hide my excitement. I was practically screaming '凄い！'. I went immediately towards the Member Produce Goods to grab those goods requested by my friends and also, for myself. After pondering for awhile, I decided to forgo the Dome limited T-shirt and bought the Star series T-shirt instead. I decided to also grab all the goods I wanted for myself so that I need not go to the venue earlier and also the fear of queuing for the goods freaked me out. In the end, I spent close to 33k yen at the shop and I was given this HUGE plastic bag to hold all the goods I bought. 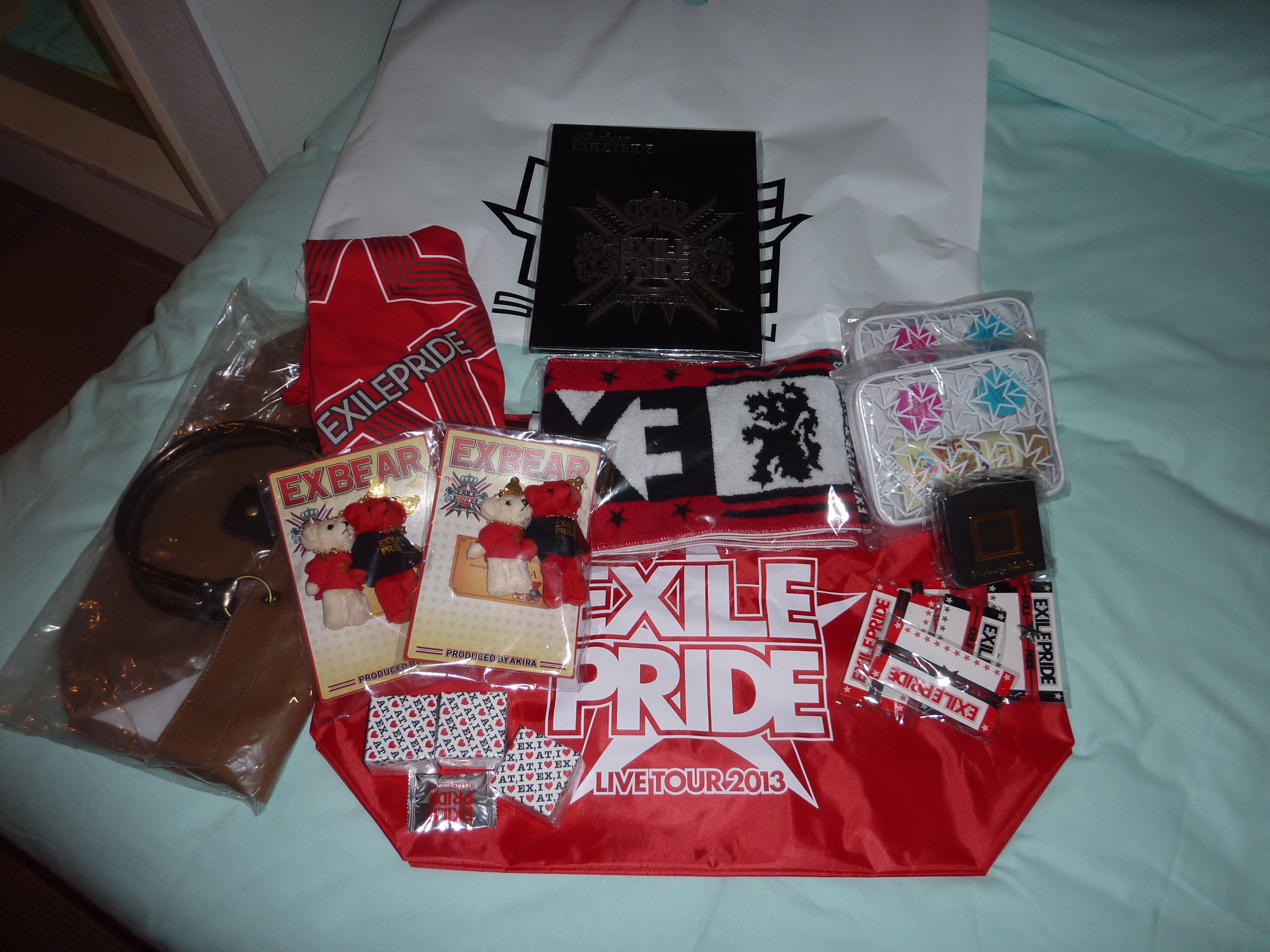 17th April... We took a early Shinkasen trip to Osaka and arrived at our Hotel Hanshin at around 12. My ticket was delivered and kept by the receptionist. We had lunch together and I parted with my Aunt and Sister at 16:00 and made my way towards the Kyocera Dome. I was all geared up for the concert... wearing my EXILE PRIDE Tee and muffler tower around my neck.. After alighting at Dome Mae station, I began to hit me that it was not a dream but a reality... I was actually going for EXILE's concert!!! The dome was BIG and weirdly shaped like an UFO (exactly what I have seen in pictures).. but the feeling of actually seeing it personally was amazing.. There were many people outside, waiting for the concert to start at 18:30. They were all pumped up, some dressed in concert T-shirts, 24karats Jersey and some even in handmade outfits. 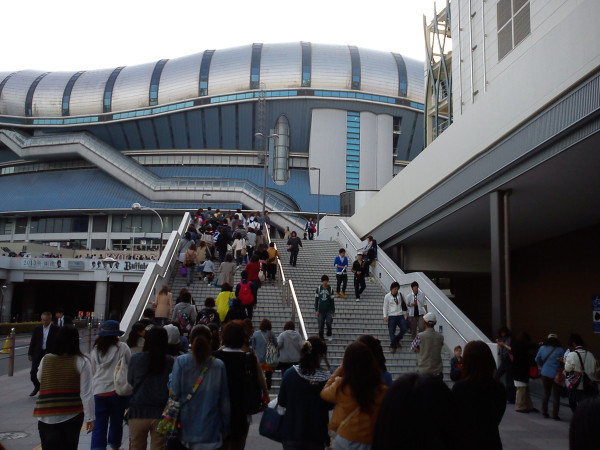 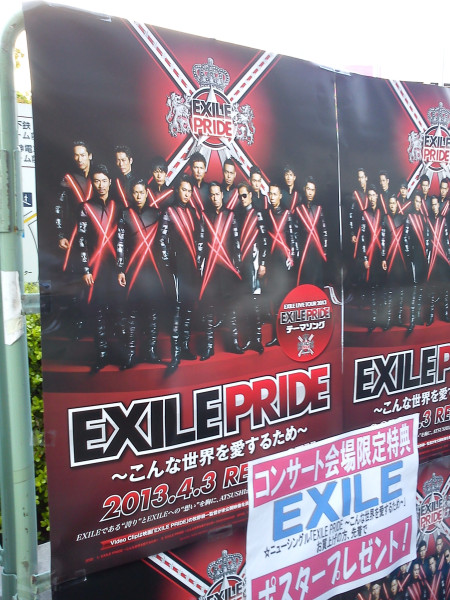 I was literally lost trying to find my way towards the 24karats Special Exhibition area and I had to ask 2-3 staff because the area was so big and there were too many people around. The exhibition area was amazing and they sold the 24karats jerseys which I was so tempted to get (but I resisted because of the price!!).. I had to asked people to help me take photos with myself around the shop.. thankfully they were nice.. well, EXILE fans are really nice people in general... =D 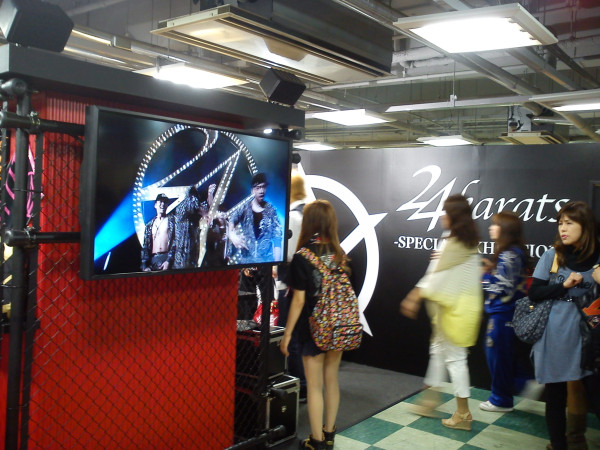 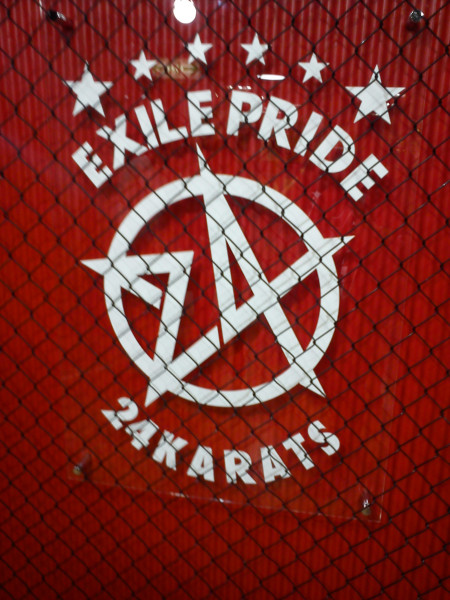 At 17:45, I decide to enter inside the venue. I entered the gate as stated in my ticket and headed to level 3 (was assigned a seat at level 3) and there is was... the actual venue! I sat at my seat and waited for the time to pass. A kind Obasan sat next to me and she talked to me. She was shocked that I was not a Japanese and I specially flew all the way from Singapore to see them. We immediately clicked as our Ichiban was TAKAHIRO. At 18:45, the concert started. I was screaming when they played the starting movie because that was the moment I have been waiting for.. When I actually saw the guys on stage, I felt like I transcended in a dreamworld... 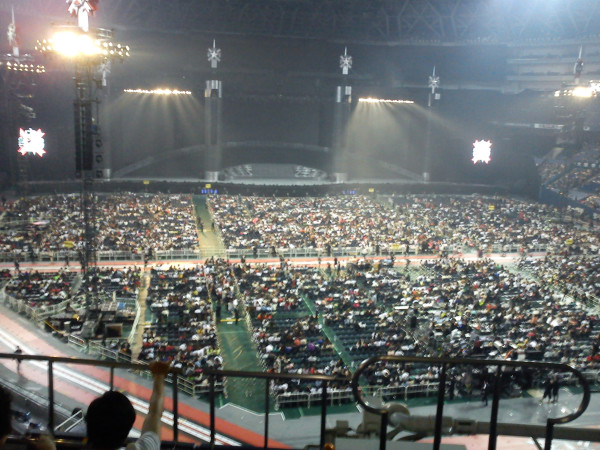 The beginning was fantastic as the starting movie was awesome and the members appeared in those glow in the dark outfits. They kicked start the concert with 'EXILE PRIDE～こんな世界を愛するため～' and sang catchy numbers such as ALL NIGHT LONG, Choo Choo TRAIN etc... It was the start of an awesome night with tons of fangirling!!~

When THE SECOND performed, it was so energetic and they got the crowd putting their hands in the air and cheering for them. It was indeed a sight! I remembered not liking their stuff but after that performance, I began to like their songs more now.

After their performance, some elegant dancers were dancing using those hanging curtains and it was the beginning of 'Ti Amo'... It was the most beautiful performance (if I must say so myself) that I have ever watched for 'Ti Amo'. I was so memorized by it and sat down to enjoy every second of it. I really love the softer side of EXILE especially their ballads (which got me into their music) so it was nice to sit down and experience those magical moments...

I was really happy to see ATSUSHI and TAKAHIRO performing their solos. When ATSUSHI played the piano and sang, I literally melted. His voice was just as good or not, even better on CD. TAKAHIRO's solo was well, 'shameless' haha in my own opinion because he was so handsome with his white suit. The spotlight was on him without any backup dancers and his PV was being played at the background while he sang. I think all the girls went crazy during his solo and yes, I was also one of those victim! The MC was pretty short by the 2 vocalists but they mentioned their thoughts on HIRO's retirement as a performer before singing their older stuff such as 'ただ…逢いたくて', 'Your eyes only～曖昧な僕のカタチ'etc.. I was really really HAPPY that they sang '道' because that is my favourite song by EXILE. When they sang that, it reminded me once again for my love to EXILE. After the ballads, they went along singing 'Rising Sun', 'I wish for you', 'Everything' and 'SUMMER TIME LOVE'. 'SUMMER TIME LOVE' was fun because all the members were dancing; including TAKAHIRO and ATSUSHI!! So it was indeed a rare sight!!

I like the performance of 'BOW & ARROW' because they rode on those 'trucks' and I got to see them closer compared to the stage. It is also quite rare to see this song being performed LIVE. They even let a member draw an actual bow so it was really cool~

As the hours went by, finally it was the ENCORE time. They saved their most exciting performance which was '24karats TRIBE of GOLD'.. It was awesomeness to the MAX to see not only EXILE but Sandaime JSB, GENERATIONS and other LDH artists dancing to this explosive song. I thought Sandaime JSB will not perform but thankfully, they were there!!~

The concert ended with 'Love, Dream and Happiness' and at the end, each of them took turns to climb up a flight of stairs and bow to the crowd. I screamed for each members' name. HIRO san was the last person and he had the most cheers. At that moment, I was trying to fight back my tears because it was the last time I could see HIRO san performing in the EXILE stage. It was indeed a touching moment that I will never forget!

The concert ended about 2100. 3 over hours had passed just like that and I must say, it was an experience I will cherish forever.. Thank you EXILE for giving me not only new friends, but also awesome memories. My love and support for EXILE became even stronger after that....

Here are some feedbacks from previous buyers..

Notes:
1) Prices are stated in USD or SGD; excluding shipping/postage charges
2) I ship both locally (Singapore) and internationally
3) Payment Method
Internationally = Paypal (buyer to bear paypal charges) or conceal cash (at your own risk!);
Locally = Bank Transfer, Cash or Paypal (buyer to bear paypal charges); Meet Ups at Bukit Batok or Clementi MRT
4) Goods sold are not refundable or exchangable
5) I am not liable for missing items upon postage so opt for registered postage to play safe
6) If there are 2 or more parties interested in the same item, i will sell to the party that place the highest bid
7) Price stated can be negotiable so if you're interested, please leave a message!!! 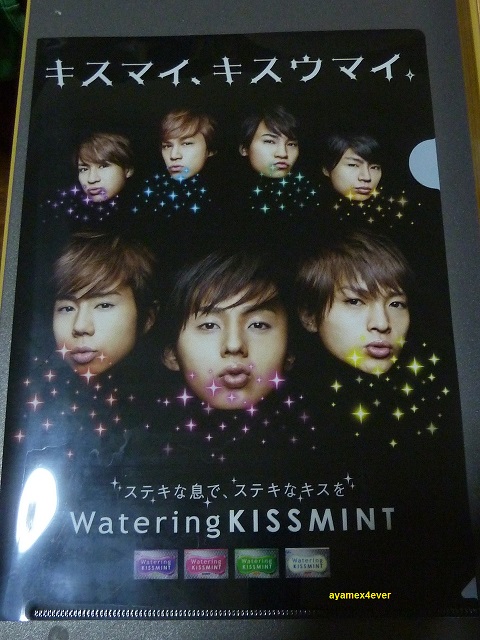 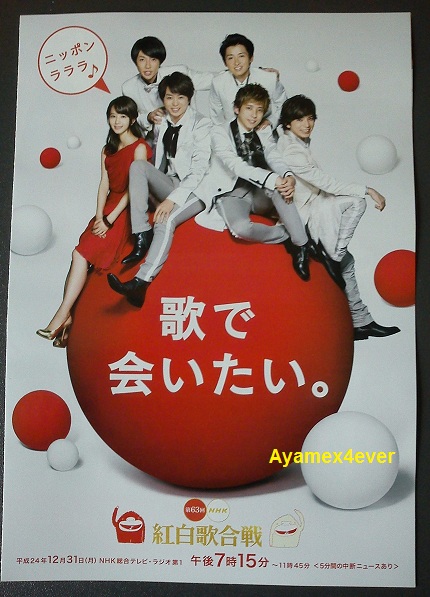 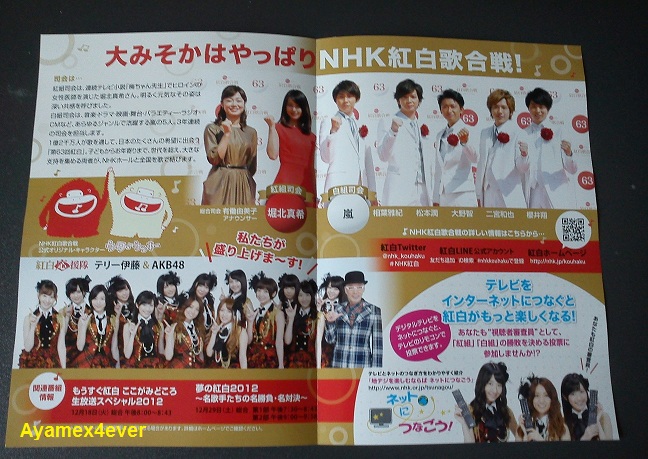 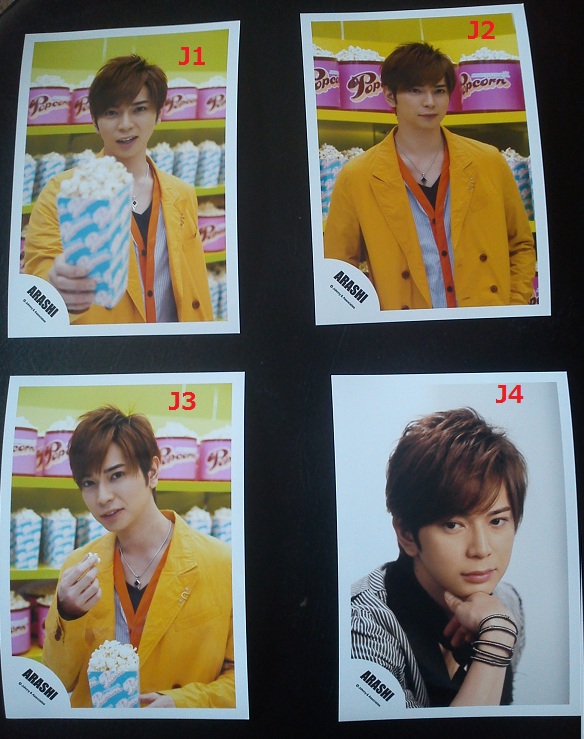 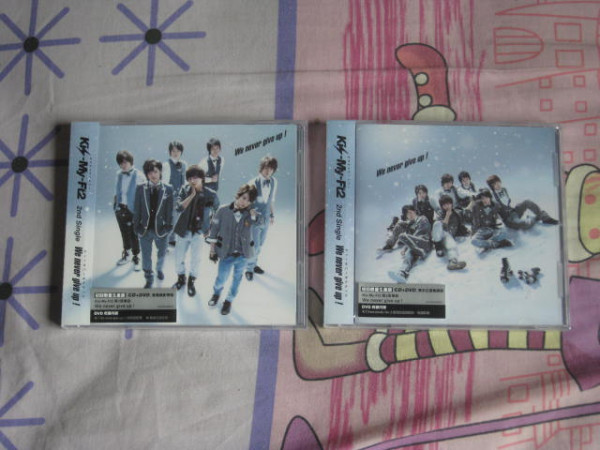 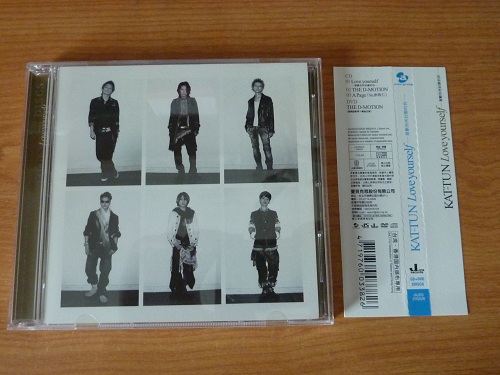 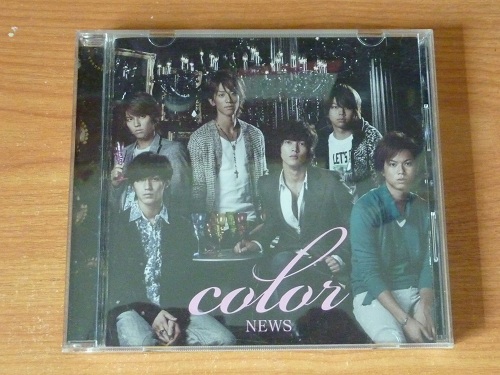 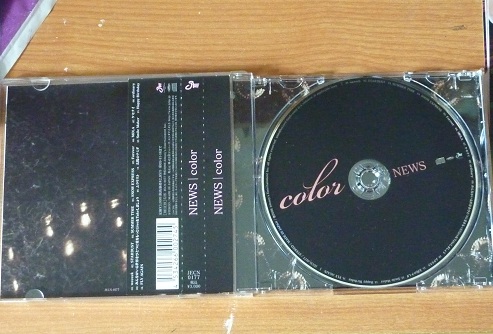 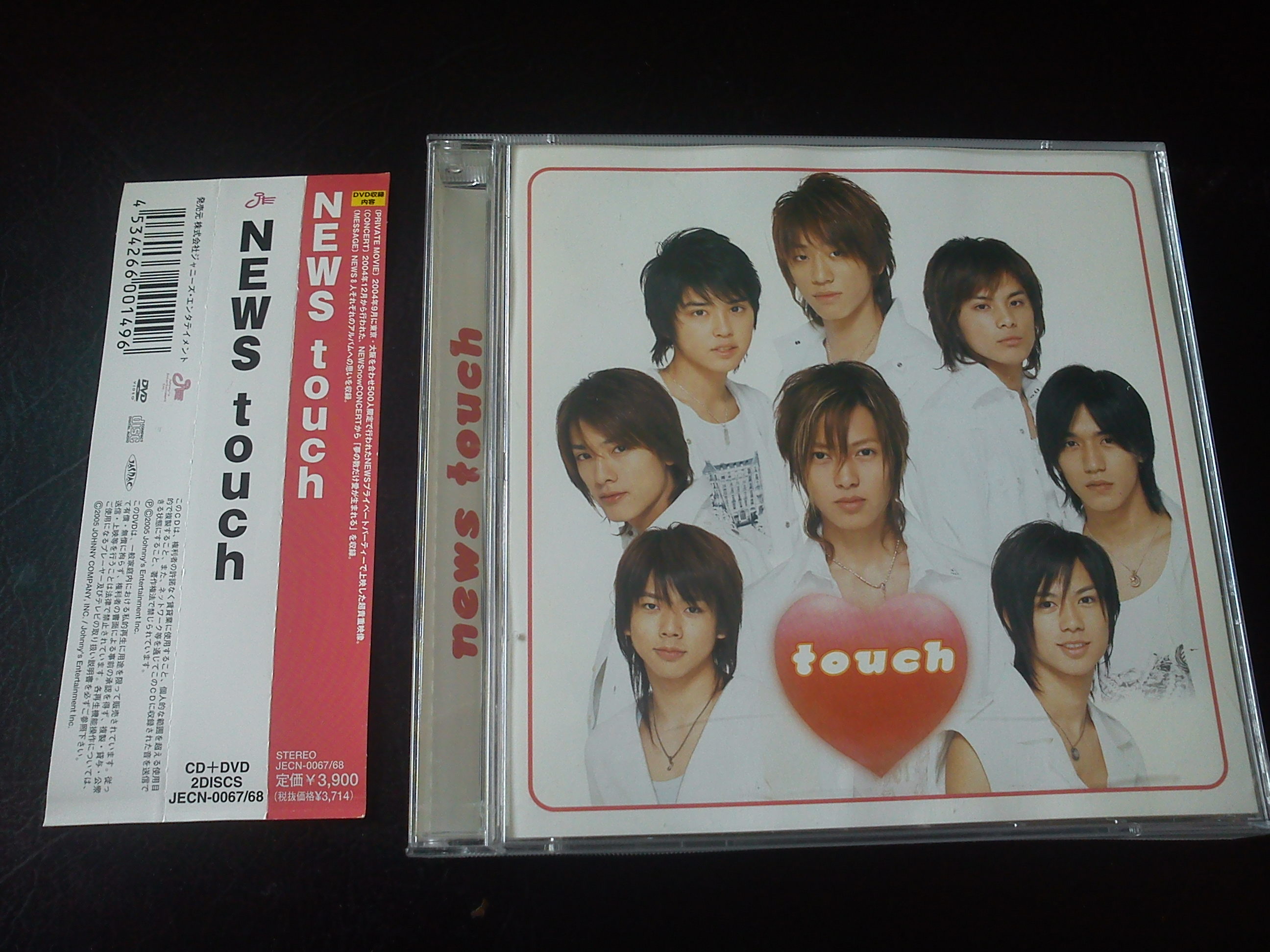 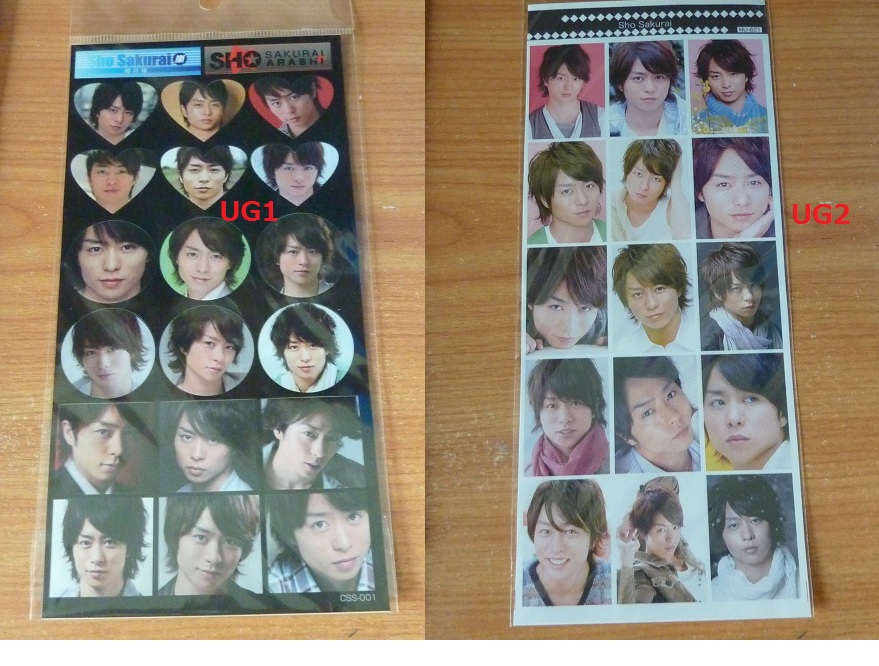 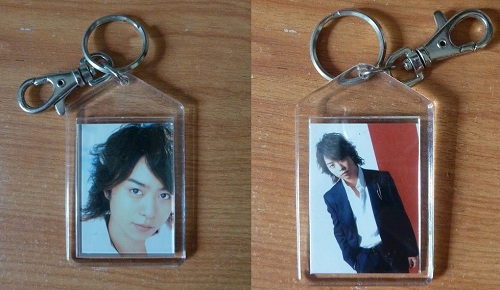 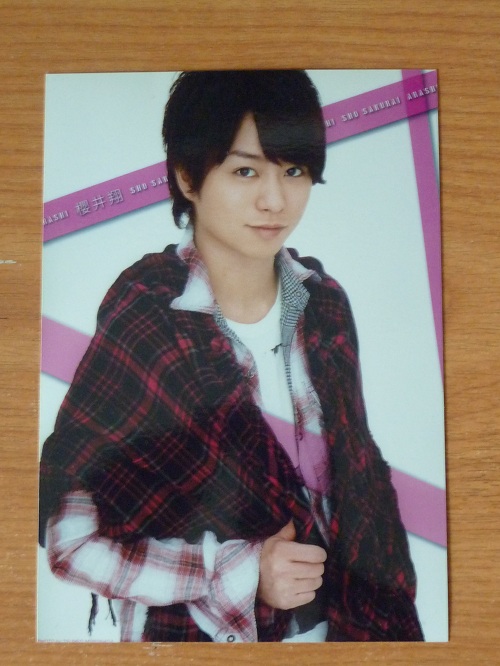 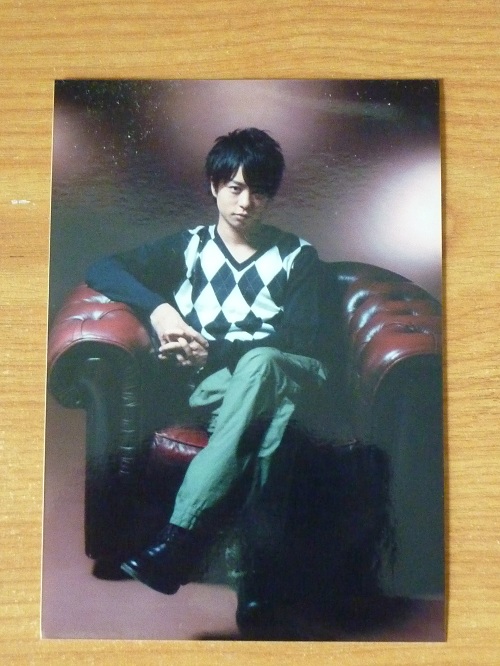 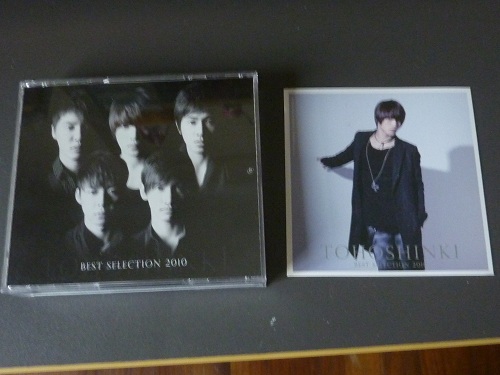 She looks so stunning there! And I love the fact that she filmed the PV in the winter setting (just like what EXILE did).. Fantastic!!

'MELROSE~Aisanai Yakusoku~' is a sad love ballad and the PV was short at the desert of Los Angeles!!

That is one CRAZY BEST ALBUM!!!! OMG!!! Can't wait to hear the new songs in there and also to find out what's in the 5th Disc..

Sandaime JSB will be releasing their new single 'Powder Snow ~Eien ni Owaranai Fuyu~' on the 14th of November.


The single will come in 2 editions: CD Only and CD+DVD.. 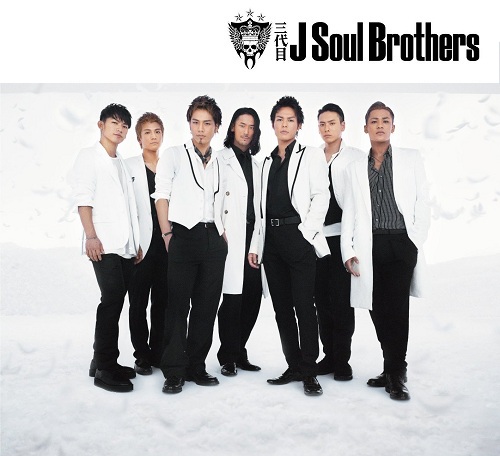